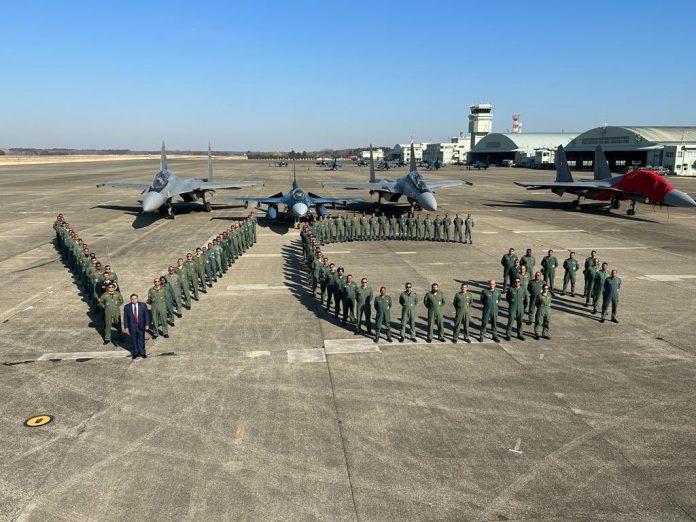 Washington, DC – The Indian Air Force and Japan’s Air Self Defense Force (JASDF) kicked off their first joint Air Exercise, ‘Veer Guardian-2023’ at Hyakuri Air Base, Japan, on January 12. This exercise will promote Air Defense cooperation between the countries and conclude on January 26.

The Indian contingent participating in the air exercise will include four Su-30 MKI, two C-17, and one IL-78 aircraft. The JASDF will participate with four F-2 & four F-15 aircraft, per a statement from India’s Defense Ministry. The Indian fighter squadron will be led by Sukhoi-30MKI Squadron Leader Avni Chaturvedi, marking the first instance of a female fighter pilot leading the Indian side in a bilateral joint air exercise.

At the second 2+2 Foreign and Defense Ministerial meeting held in Tokyo, Japan, in September last year, India and Japan agreed to step up bilateral defense cooperation and engage in more military exercises, including having the first joint fighter jet drills, reflecting the growing security cooperation between the two sides. This exercise will be a step forward in deepening strategic ties and closer defense cooperation between the two countries.

India and Japan’s shared concerns over China’s use of military threats to maintain its hegemony have nudged them into closer defense cooperation. Japan’s new security strategy mentions China as “the biggest strategic challenge.”

Exercise ‘Veer Guardian’ will fortify the long-standing bond of friendship and enhance the avenues of defense cooperation between the two Air Forces. The inaugural exercise includes various aerial combat drills between the two Air Forces. They will conduct multi-domain air combat missions in a complex environment and exchange best practices. Experts from both sides will also engage in discussions to share their expertise on operational aspects.

In February last year, the Indian Army and Japanese Ground Self Defense Force conducted DHARMA GUARDIAN-2022, an annual exercise. Twelve days of intense joint military training covered a vast spectrum from cross-training and combat conditioning in field conditions to sports and cultural exchanges. The two armies rubbed shoulders attending various demonstrations, at firing ranges, and during different tactical exercises. Both contingents not only shared their expertise on contemporary subjects of counter-terrorism operations but also used this opportunity to share their experiences on exploiting disruptive technologies like Drone and Anti-Drone weapons.

The two nations conducted the sixth edition of the Japan-India Maritime Exercise 2022, JIMEX 22, hosted by the Indian Navy in the Bay of Bengal in September last year. JIMEX 22 witnessed some of the most complex exercises undertaken jointly by the two navies. Both sides engaged in advanced-level anti-submarine warfare, weapon firings, and Air Defense exercises. Shipborne helicopters, fighter aircraft, and submarines also participated in the exercise. IN and JMSDF ships replenished each other at sea under the agreement on Reciprocal Provision for Supply and Services (RPSS).