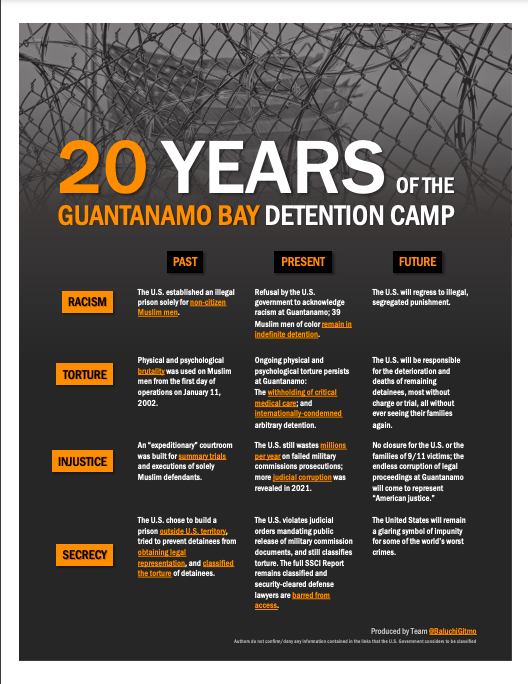 Washington, DC – Today marks 20 years since the first prisoners arrived at Camp X-Ray in Guantanamo Bay, Cuba. In a statement from the Office of the High Commissioner for Human Rights (OHCHR) marking this grim anniversary, UN experts called Guantanamo Bay “a site of unparalleled notoriety, defined by the systematic use of torture, and other cruel, inhuman or degrading treatment against hundreds of men brought to the site and deprived of their most fundamental rights.”

Terry Rockefeller, a member of September 11th Families for Peaceful Tomorrows (PT), said, “January 11 is a day when many of us will be hoping, yet again, that Guantanamo can be closed. But by and large, when people think about Guantanamo as they should, they think about the hundreds of men who were detained and those who remain there, especially those who were detained without charge, which is a violation of law.”

Members of PT, each of whom had a relative killed in the 9/11 terrorist attacks, have called upon the Biden Administration to honor its stated intent to close the detention facilities at the Guantanamo Bay Naval Base. Calling the offshore prison and the Military Commissions that operate on the base “a stain on our nation’s human rights record and a betrayal of our commitment to the rule of law,” PT is advocating for relocation of cleared detainees, and pre-trial agreements to resolve the remaining cases and provide a path to achieving Guantanamo’s eventual closure.

Since the site was opened in 2002, the facility has held 779 prisoners, and 39 detainees remain. Per the New York Times Guantánamo Docket, only 12 have been charged with crimes, and 14 detainees have been cleared for transfer. According to OHCHR, “nine detainees died in custody, two from natural causes and seven reportedly committed suicide. None had been charged or convicted of a crime.”

“Instead of facing those mistakes and being honest about them to the American public, every successive administration has perpetrated this idea that Guantanamo is somehow necessary, that these particular Muslim men require a separate justice system, a separate prison. This is not only illegal under international law, but it is just not true,” says Pradhan.

“Nobody should be defending the abuse of human rights,” says Elizabeth Miller, a Rule of Law Fellow for PT. “I think being dismissive of torture is irresponsible. It hinders any sort of progression by not acknowledging what happened.” Miller, who lost her father on 9/11, is frustrated by the failure of the United States to take accountability for its actions. “The US carried out heinous acts, and now they have to take accountability for that, factor that in, and move the trial along. President Biden and his administration have the ability to close the prison. It’s time to let the American people know what’s really going on because it’s not fair to anybody, not to the family members, not for the detainees, not for the people of this country, and not for the people around the world.”

Majid Khan’s public statement at his sentencing in October 2021 provided previously unknown details of the torture to which he was subjected while in US custody. Seven out of the eight jurors submitted a handwritten clemency letter (obtained by the New York Times) to the Convening Authority (CA), in which they condemned Mr. Khan’s torture as “a stain on the moral fiber of America” that “should be a source of shame for the U.S. government.”

Rockefeller speaks of the family members who have died in the 20 years since 9/11, and they died wanting to know the truth and not having learned. The Majid Khan decision, and seeing what those senior military officials said about the treatment of Majid Khan, is going to have the same impact when they learn about the torture of the 9/11defendants, says Rockefeller, adding, “It’s been a travesty of justice, but I really believe the only way family members, those of us who are still alive, are going to learn what would have come out as evidence, is that if there’s a pretrial agreement and the defendants are forced as part of that agreement, the defendants agree and have to make a statement of fact comparable to what Majid Khan had to do.”

Leila Murphy, a member of PT and a law school student, believes that Guantanamo represents human rights abuse and is the legacy of America’s torture and complete disregard for any rule of law. Murphy, who lost her father in the 9/11 attack, said, “Military Commissions are no closer than they were when they started this to having any sort of accountability for family members for 9/11. It doesn’t seem like they will ever be able to really deliver any form of real justice or accountability.” Murphy feels there has been no accountability for torture, and no answers to questions that people still have about 9/11, like why the government wasn’t able to prevent the attack, and why there were so many institutional failures. “I think there’s a lot that family members still want answers for that we haven’t gotten, and a lot of that is due to the fact that the Military Commissions are just so slow, and the process is just not and has never been designed to deliver justice.” What gives Murphy hope for the future is the amount of coverage there has been in the past 20 years, and the consensus that has developed over how abhorrent the government’s practices were in the wake of 9/11. “That gives me hope that there are some more efforts at accountability and some more people who are trying to reckon with what happened.”

Pradhan believes that what justice looks like now is a combination of releasing the truth, not just about September 11th, but about what happened afterwards, including about the crimes that the US also committed. There is no hope of a fair trial, but Pradhan says there is a lot that can be done to achieve measures of justice. “What we can do is we can negotiate case resolutions. We can declassify information about US torture. We can declassify and release to the families more information about what the US government investigated and knew about September 11th, which really hasn’t happened yet. President Biden has sort of started to do that. And, you know, 20 years later, I think it’s more than overdue.”

Poonam is a multi-media journalist, and Founder and Editor of Global Strat View. She was the Managing Editor of India America Today (IAT) for seven years, and launched its print edition in 2019 with IAT's Founder and Editor, the late Tejinder Singh.

Washington, DC - The Department of Defense announced that the United States government has detected and is tracking a...

Washington, DC - On January 25, on orders from President Biden, the US military conducted an assault operation in...
- Advertisement -

Global Strat View is hosting a panel discussion on...

Could Peace be on the Horizon in Yemen?